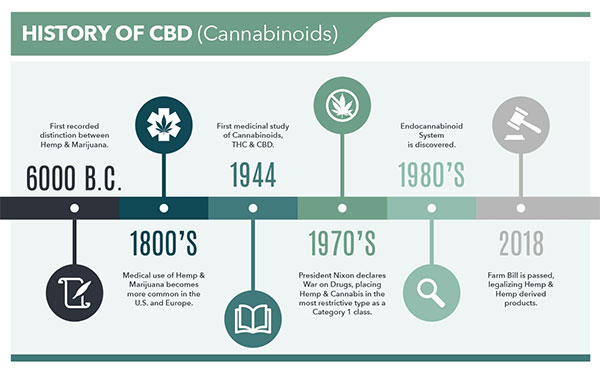 Most people think that CBD is a new and modern discovery. However, that’s far from the truth. Surprisingly, CBD and hemp oil have been used throughout history to treat various ailments. From people in the Himalayas to the ancient Egyptians, it has been a part of many cultures across the globe. Let’s find out more.

The earliest evidence of cannabis domesticated by man dates back to 15,000 years ago. Archaeologists have even unearthed samples of hemp dating back as far as 5,500 BC. Research shows that hemp was used for multiple purposes, such as clothing, textiles, supplementation, and rituals.

You may be quite surprised to know that the medical use of CBD began in ancient China, where cannabis tea was prescribed as a cure for rheumatism, gout, and malaria. Records from ancient Egypt show cannabis as an effective anti-inflammatory. Cannabis had been used in India for thousands of years as herbal medicine. Throughout ancient times the use of CBD was prevalent in Eastern cultures. It first reached the west through trade in the medieval age. Cannabis was documented as a treatment for coughs, tumors, and jaundice.

Story Of CBD In The Modern Age

Cannabis made its way across the Atlantic to the new world of the Americas in the modern age. In the beginning, hemp was only cultivated for the textile industry. The medical community soon realized the potential health benefits of cannabis. What’s fascinating is, American medical journals were actively promoting the benefits of cannabis in the 1700s. These highlighted the versatility of CBD in treating a variety of health issues. Cannabis became commercially available and medically accepted by the mid-1800s.

The pioneer who made this possible was Irish physician William Brooke O’Shaughnessy. He is commonly known for his work that led to the intravenous drip. He strongly advocated for cannabis for its medicinal use. He spent much of his life studying botanical pharmacology in India.

Commercial marketing of CBD started in England as a remedy for rheumatism and convulsions. It soon became popular as being a single solution for a variety of ailments such as nausea, migraines, coughs, sleep, fever, among others. It was commercially available in most of the western world well into the 1940s. So what really happened after that?

The late 1800s saw a paradigm shift in the way most pharmaceutical companies started operating. A multitude of quick buck making companies started making outrageous claims of their ‘Cure-all formulas.’ Consequently, the United States faced an addiction crisis due to the availability of substances like morphine, cocaine, and opium in stores.

The FDA was formed in 1906 to monitor anything sold for consumption in the US, which had a detrimental effect on the body. The social stigma of smoking cannabis (or marijuana) was then linked to Mexican immigrants and thought of as ‘un-American.’ However, the final blow to CBD came in 1937 when non-medical cannabis was declared illegal in the majority of states in the country. The use of cannabis was further maligned as a criminal activity, and the pharmaceutical companies stopped investing in cannabis oil. However, things are gradually changing in favor of CBD.

Contemporary research has made some groundbreaking discoveries about the several medicinal and therapeutic properties of CBD Oil. In general, people have started looking out for all-natural alternative solutions. CBD Oil has rather shown promising results in various studies, and more research is still warranted.

CBD industry is unregulated. We want you to be healthy and safe while using CBD oils. We use CO2 extraction to guarantee purity. Our products are not just natural but also 100% safe.