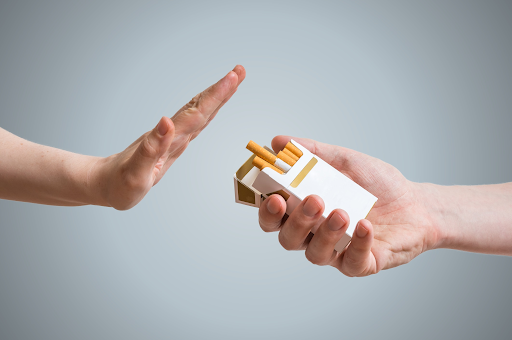 Are you also trying to give up smoking like millions of other people? Do you think its nearly impossible to give up nicotine addiction? Well, what if we tell you that there is a natural way to beat this addiction.

Sometimes things that look seemingly harmless can have dire consequences. Smoking can have a negative impact on your health and well being. CBD might give you the edge you need in successfully quitting cigarette smoking. For instance, smoking takes away the lives of nearly half a million people in the United States alone. That’s an alarming figure, and that definitely needs immediate attention. It’s been estimated that smokers die almost ten years earlier than people who don’t smoke. Many smokers who want to give up smoking find it next to impossible to do that. That’s why more smokers are turning to nicotine gum, patches, behavioral therapy, and CBD.

How Nicotine Harms You?

Nicotine is a highly addictive substance that manipulates the synaptic receptors in the brain. It also induces the brain to release a rush of dopamine or the ‘feel-good’ hormone. Over time, the nicotine molecule modifies the dopamine and other neurochemical receptors to create a nicotine dependence.

So when a smoker tries to quit smoking, his brain is not able to release the same amount of dopamine. This precisely leads to withdrawal symptoms, and the habitual smoker falls back to smoking again. The withdrawal symptoms include a bunch of annoying problems like anxiety, depression, mood disorder, weight gain, drowsiness, and trouble sleeping. These symptoms severely affect a person’s wellbeing.

attempts to give up smoking. Most people who are successful in quitting cigarettes eventually end up relapsing. Most of the techniques help with a temporary fix, and that doesn’t really take care of the problem at the root.

Does CBD Cut Down Cigarette Smoking?

In 2013, researchers from University College London declared results from a randomized, double placebo-controlled study with 24 people who wanted to quit smoking. Each person was given an inhaler with instructions to use it whenever they felt an urge to smoke.

CBD may prove to be the all-natural remedy that can help you quit smoking and lead a healthier life. The best thing about CBD is its non-psychoactive and non-addictive nature. Always consult your physician for more guidance on the dosage of CBD products.

In 2013, a research team at University College London conducted an experiment to gain a better insight into the role of the endocannabinoid system in nicotine addiction. In this randomized, double-blind placebo-controlled study, there were 24 participants. Out of 24, 12 were given a vaporizer that actually contained CBD, and 12 were given a vaporizer that only contained a placebo. All the smokers were instructed to use their vaporizer whenever they had an urge to smoke.

CBD takes off the Attention from Cigarette Cues

In another research conducted in 2018 by the University

of College London, researchers studied how CBD affected the cessation of smoking. CBD is known to have anxiolytic properties and minimal side effects. The research showed that CBD is quite effective in changing the degree of drug cues.

The health benefits that ensue after quitting cigarettes

are beyond excellent. You not only improve your physical health, but it also balances your mental well being.

Extensive research still needs to be done to firmly establish the benefits of CBD for smokers seeking treatment to give up their habit. There are several skeptics who express their concern over the possibility of chemical reactions or side effects. Although no one has reported major side effects, research in the CBD field is still in its early stages.